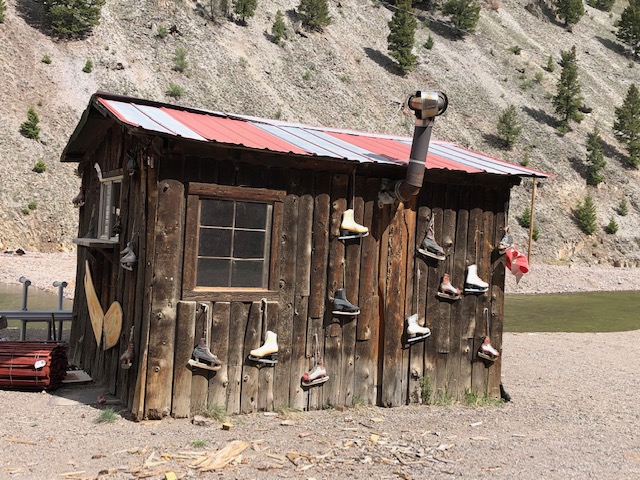 Several weeks back your friends from PipesTraveler.com had the good fortune to slip into a small Colorado town by the name of Creede. It’s located in the Southeastern part of the state in the middle of nothing but wilderness. The closest town of any substance is over and hour away, Alamosa.

The fabulous Rio Grande National Forest is nearby as is the Weminuche Wilderness. We loved this place for the reasons stated above….remote, small, close to the cool wild places that we like to explore. Not far from this town is the headwaters and the origin of the magnificent Rio Grande River. I shot the pic of Liz at this location and its really quite special.

Fifteen miles up the road is one of our fav remote campgrounds for boondocking. Thirty Mile Campground and fifteen miles further is the town of Lake City, CO. The entire stretch of road is awesome with lots of amazing views and sights to see including very high mountain passes, and a curious waterfall that we didn’t expect to see. North Clear Creek Falls is a dramatic waterfall near Lake City, CO. It’s located along the Silverthread Scenic Byway, Highway 149.

Crazy, but I just looked back through my previous blog reportages and realized that I didn’t do a post on our incredible stay at Thirty Mile Campground…did do some Facebook posts but apparently missed that one. Stand by cause it was freaking incredible!

Now to the title of this reportage…Flotsam. As reported in early pioneer newspapers the mining in and around Creede was said to have produced an abundance of flotsam and more so than any of the other mining camps. So, whats flotsam? It’s defined as something being rejected or regarded as worthless. Evidently the miners working to bring out gold and silver ore were busting their asses in those horrible conditions back in the late 1800’s handling way more material to obtain the payload they were after. The reports of the overall “take” being 58M ounces of silver and 150M ounces of gold. By 1893 the boon was over for Creede yet the scar of the mountain and the mining operations remains while long dormant are visible today. As a matter of fact the town of Creede appears to have been poured out of huge fissures of the mountain where the primary mining took place.

Today Creede, Colorado is mostly a community with tourism as its base economy. It’s a very cool place to visit, shop and explore its rich mining history. We made sure to visit while the annual Donkey Dash was taking place in town and the community did a fantastic job to ensure that the event was successful. Everyone attending had lots of fun. We made a point to stop by the Creede & Mineral County Visitors Center to say hello and the staff were very welcoming and informative.

Today, the population of Creede is only about 350 residents, I think I met all of them. Just a smidge more about the history… the town was named after Nicholas Creede who discovered the Holy Moses Mine. Personally, I would have voted for the name of the town to be Holy Moses over Creede but alas I wasn’t asked. Other characters on the scene back in the day were: Soapy Smith a local criminal who opened “The Orleans Club”, Robert Ford who was the guy that killed Jesse James, Bat Masterson, and “Cap” Light who was the 1st Deputy Sheriff. A cool cast I’d say, perfect for a frontier shanty town…throw in a bunch of rough miners, a few wealthy mine owners, ladies for evening entertainment, and a couple of saloons….the stage is set!

We had fun and know you will too. Take the trip over to see this friendly little town, walk the streets and do the Historic Batchelor Loop driving tour…its 16 miles of fun. My friend “Downtown” Gary Brown loves Creede too so it really can’t be bad! He’s well known for being a man of the most discriminating tastes.