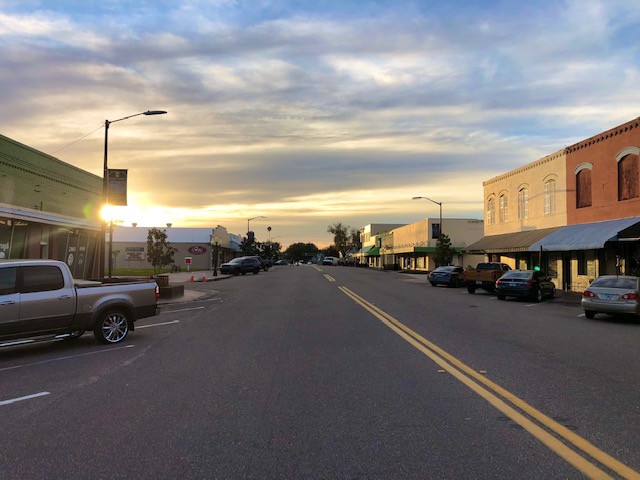 While we’re still in the central Florida area for our winter respite, we wanted to get out and around our home county (Polk) to revisit some of the nearby communities. Just about ten miles south of Bartow and 50 miles east of Tampa lies the small historic town of Fort Meade.

My memories of Fort Meade was that of a quick dash hideaway from my hometown to simply “get out of town”. The visits often involved hunting either quail or dove, a place to get a few beers without being of age or chase girls. All of these generally got me into trouble but fortunately typical small town hijinks. It was then and still very much now a busy blue collar community with the main occupations being agri related. Workers back in the 1960’s and 70’s were mostly working for the phosphate mines, the citrus industry, or perhaps ranching.

Bars like the old El Cid and others bustled back then especially on Friday nights – pay checks were cashed and the rough and tumble came out to play, drink and fight. I remember the huge guy that worked the door was the “peacekeeper” at the El Cid and he was not prone to hesitate when things got heated. Throwing punches, grabbing a collar and out they went! I suspect this scene has played out thousands of times over the many years of Fort Meade history.

The town was settled in 1849 and named after George Meade an Army Lieutenant serving in the Florida Seminole War and did the initial surveying for the road through that area. Being a true southerner, I’m sad to admit that Meade later joined the Union forces became a General and fought against General Robert E. Lee at the battle of Gettysburg, winning that battle. Of note, is the fact that future Confederate General Stonewall Jackson was stationed at the fort in 1851.

The town is still able to boast that approximately 300 homes still exist that are on the National Register of Historic Places… this is very cool and makes you wonder how incredible it would be to see all of them restored for everyone to enjoy!

The elevation (typical of Florida) is only 138′ above sea level…amazing to us when the consider the many places we’ve visited in the US with elevations exceeding 10,000′ elevations. The incredible flora/fauna, cultural differences and of course climates as we roam always add to our adventures.

The current population of Fort Meade is roughly 6,300 and has a healthy representation of ethnic groups. As I stated earlier, a busy and productive community of folks all working hard to make ends meet and finding time for family. In the fifty years since my time in Polk County I haven’t seen much change in the town at all. Some of the bars and restaurants have changed hands, been remodeled and in between there’s a few new businesses. I did enjoy turning onto West Broadway Street it looks updated, clean and prosperous. Further down the street was the Fort Meade Historical Museum, a small string of railroad cars on display and the old RR Depot.

Despite the four devastating fires over the towns 170 year history there’s still over 150 buildings that are designated as landmarks inside the city limits. One of these beauties is the 1886 Christ Episcopal Church on East Broadway Street. Kinda neat to just drive around and see a few of the very old places many of which are in need of TLC.. The style and architectural details still make you appreciate the early days in Florida. Many of the homes are in the typical old Florida Cracker style.

I suspect that the economic changes over the years, good and bad, have impacted the area, but like others it’s surviving and thriving. The citrus greening disease, the phosphate industry “moving on” and business climate fluctuations has stifled growth but new businesses moving into the area to the north of town are surely helping and are terrific to witness! The news about the expansion of the Peace River Citrus Company will bring many more higher paying jobs just up the road.

Over all the years the once mighty Peace River has ebbed and flowed it has clearly been the victim of the phosphate mining that scarred so much of the state. Still today the Peace River Trail a 2.5m trail is popular for the locals but upon inspection seems to now depict more ruin than majesty. Also a few miles north is the remains of the Kissengen Springs site where folks for many years including my parents and grandparents basked in the sun and enjoyed the cool spring waters that bubbled up and made a large natural swimming pool. Also many will remember the locally famous Sand Mountain that was built from the mining operations tailings… just a huge mountain of white sand for kids to climb onto then slide down on cardboard. The “mountain” of sand no longer exists but sure was fun for thousands of families over several years!

Home values seem to be very attractive in Fort Meade. I noticed a home built in 1901 that’s a huge 4,300 sf with five bedrooms and five baths offered for only $260K. Many fixer-uppers can be taken for much less for the more adventurous.
https://app.kw.com/KW/property/2173197198/#!/

As a town, Fort Meade is a dang scrapper. I think in many respects its still fledgling but surely finding its place. Over its history it has managed to produce many a fine citizen and has served as the hometown for a plethora of wonderful families. A friendly spot on the central Florida map that still has much potential if it continues to embrace its history, properly manages code enforcement and provides the proper climate for business growth. We’ll surely be back again.